As beekeepers, we are constantly trying to protect our honeybees from mites, sundry pests, and pathogens, robbing, swarming, and other outside forces. This week I found myself spending a lot of restless nights worrying about bears. For the past 6 years, I’ve gone along with a hope and prayer that my hives would go undiscovered. However, our neighborhood Facebook group suddenly had a daily stream of black bear sightings, bird feeders ravaged, “cute” photos of a young bear sitting against a tree, or appearing on someone’s deck. Then, finally, a post by a neighbor who witnessed a bear killing a deer. Yes, they are hungry, and they are omnivores! In fact, when a bear goes after bee hives it is consuming the bees, larvae, and honey, the former being a great source of protein! I finally launched into action and invested in a solar powered bear fence! It just felt unwise to risk the investment of all those bees, woodenware, and time spent on this perpetual hobby. With the help of friend and board member Alex King, I now have a fully protected apiary!

As bears lose their habitat and encroach on rural and suburban and even urban areas you may wish to consider a bear fence to protect your apiary. Here is the link to the DNR article and schematics for a beehive protective fence:

On May 10th we held our first hybrid meeting, it was so wonderful to see so many smiling faces in person. There were forty in-person attendees and 44 people were on Zoom. At this time, our plan is to continue with this hybrid format. We hope you will join us for the upcoming hive demonstration and member meeting on June 14th, masks and veils required. Please read about our speaker(s) and meeting details in this newsletter.

I hope your bees are off to a good start…it should warm up soon!! 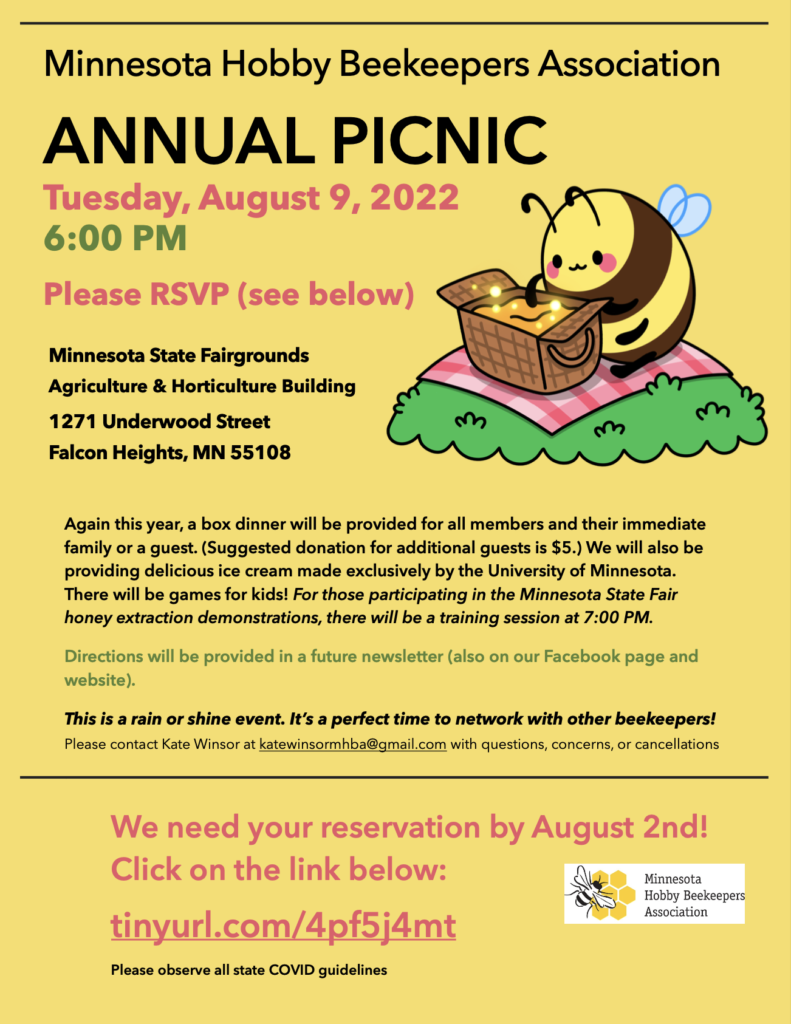 The weather is warming, and the dandelions bloomed a week or two later than normal in most places. Depending on your area, there may be a dearth in incoming pollen and nectar between the spring dandelions and fruit trees blooms, and the summer clovers and other flowers. Any dearth may mean you have to feed your colonies if the bees do not have enough stored food.

If you are based in the Twin Cities area, by now wintered colonies should be divided and packages should be ready for a second or third box depending on if you started with foundation or drawn comb.

How do you know if you should add a second or third box? The next box goes on when the colony is using 70-80% of the previous box. If you started on foundation, it is easier because if they have drawn out 7 or 8 frames then you add the next box. On drawn comb you need to look in the comb to see if the bees are using the comb. It does not matter if the bees are using the comb for nectar, pollen, or brood. If they are using the comb for something, it counts. When adding another brood box, be sure to move a frame with honey and no brood up from a lower box to the new box. This is to draw the bees into the new box. Once the comb is drawn, there should be nine frames equally spaced in the box.

When your divides are using 80% of the third box you should do a full reversal.  If we are having a strong honey flow (which I hope for) it is easy for the bees to fill that third box with honey before you notice and do a reversal. If the third box is more than half full of honey do not do this reversal and just add supers.

The most important thing in the coming months is to keep the equivalent of two empty supers (18 medium frames) on honey producing colonies at all times. As the bees fill up the supers, add more. If you do not provide room and the bees need to put honey in the brood nest, then the colony may swarm. During a big nectar flow a strong colony can fill two supers in a week. This is the reason for always having the equivalent of two empty supers on the colony.

For the rest of the early honey flow, you should do reversals and look for swarm cells every 7-10 days and add more supers as needed. Remember to keep empty supers on so the bees have a place to put the honey coming in.

If a colony has swarmed, (here’s hoping you caught the swarm) then leave the remaining bees alone and they will work it out.

If you see swarm cells and you confirm the queen is still there, meaning they have not swarmed yet, then you need to take action to prevent swarming. First remove all the swarm cells from the colony. If you want to make a nuc, then remove a frame with swarm queen cells and bees along with another frame with bees and brood. Put those two frames in a nuc box with a honey frame and a couple empty frames. Do not put the queen in the nuc. Then put empty frames in the parent colony to replace the frames you removed. To be sure you remove all the queen cells from the colony, you may have to shake the bees off the frames to see the cells better. Remember: the bees do not read the books, so the swarm queen cells are not only on the bottoms of the frames. If you do not make a nuc, then you can take 2 or 3 frames of bees and brood (not the queen or queen cells) and put them into a divide, a package, or a weaker colony that can use some help. Put empty frames in the parent colony to replace the removed frames.

You should be checking your varroa mite levels monthly. Record the results. If you have varroa now you cannot treat with some chemicals until the honey flow is over. There are now some treatments that can be used with supers on (read the label). BE SURE TO FOLLOW THE LABEL for any product you use. You can also use the drone brood removal method to keep the number of varroa down. Plan to take your supers off early and treating late summer.

Reproduction of all or part of this article without the author’s permission is prohibited.

We are busy, busy bees planning our annual banquet & fundraising auction for 2022! It will be held on October 15th at the Science Museum in St. Paul. All proceeds from the auction will go to the UMN Bee Lab’s Scholarship Fund. So, start saving your bee & honey-related items to donate.

I welcome volunteers to help! Please let me know if you are interested at [email protected]

Watch for registration info in the July newsletter and on Facebook.

Alex King here again with a friendly reminder of the volunteer opportunities available at the MN State Fair! We are less than 3 months from opening day, and we are still looking for volunteers. This is a great way to share your passion for bees AND get free admission to the Great Minnesota Get Together at the same time! We have numerous openings available for the honey extraction demos, these take place every day of the fair, four times per day, at 1pm, 2pm, 4pm, and 5pm. Each demo takes approximately 30 minutes to complete including a short Q&A session. Even if you have never extracted before we encourage you to volunteer for this. Terry McDaniel will be showing everyone where to go and how to extract honey at our Picnic in August (So make sure you can attend the picnic if you have never extracted before!)

The signup link for Honey Extraction is:  https://www.signupgenius.com/go/30e0f4ea9af22a5f85-honey1

For the Interpretive Volunteers at the observation hives, we have filled about 25% of the available time slots, but there are plenty still available. For these you will be sitting near an observation hive answering questions for the general public as they come through the exhibit hall. A time slot lasts 3 hours but anyone who has done it before can let you know that time flies by. If you haven’t currently signed up, or want to take on additional shifts, the link is available here: https://www.signupgenius.com/go/30e0f4ea9af22a5f85-beehoney1

The fair also has opportunities during the Pre and Post Fair. Pre-fair duties include making the exhibit hall ready to go for the fair, taking in exhibitor entries, assisting with judging, and setting up displays after judging. Post fair is tearing it all back apart, cleaning up, and getting all the exhibits back to the people that entered them. If you want to get a good look into "Bee-Hind the Scenes" this is the opportunity for you! https://www.signupgenius.com/go/30e0f4ea9af22a5f85-beehind1

Thanks everyone for volunteering and we cannot wait to see you all at the fair!

Everything is so new and we are not totally out of the pandemic yet. What a crazy world we are living in these days.

The 5:45 observation hive had about twenty people in the gathering. I was not able to make it but I'm glad to know there was a good turnout. 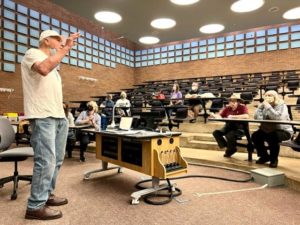 Thank you everyone for making our first hybrid meeting a success on May 10th, the first in-person hybrid meeting at the U since the beginning of the pandemic. The zoom group and our speaker Anne Marie Fauvel from the Bee Informed Partnership were projected on the screen in Ruttan Hall, room B45. A familiar meeting room we all loved to be in. Anne Marie gave an informative presentation about honeybee hygienic behavior and the testing for it. Long term member Jerry Kern had a few things to share with us about some of the skills he has gained over his 40 years of keeping bees. He is downsizing and has a few more things for sale. Give him a call at 612-328-6892. More about what he had for sale on page 10 in the March newsletter. 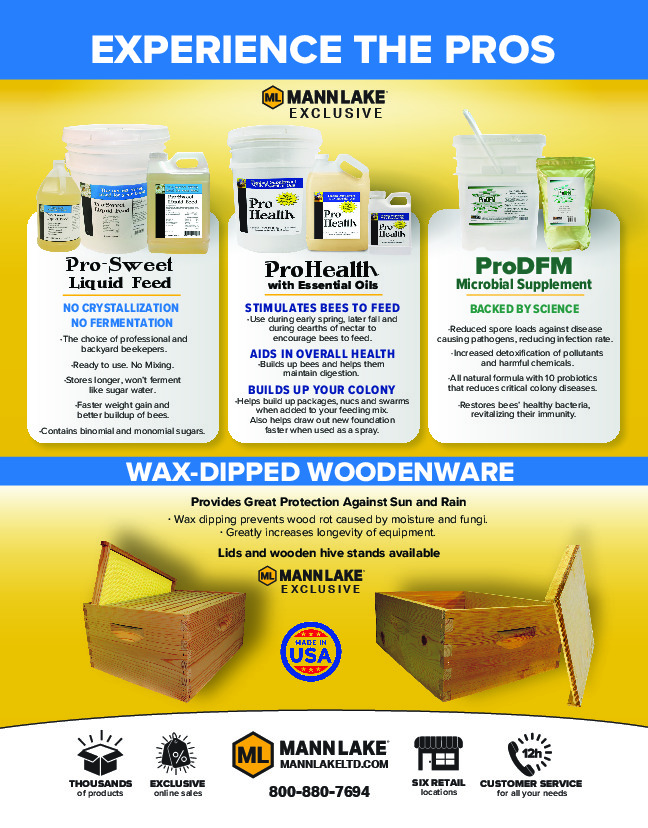 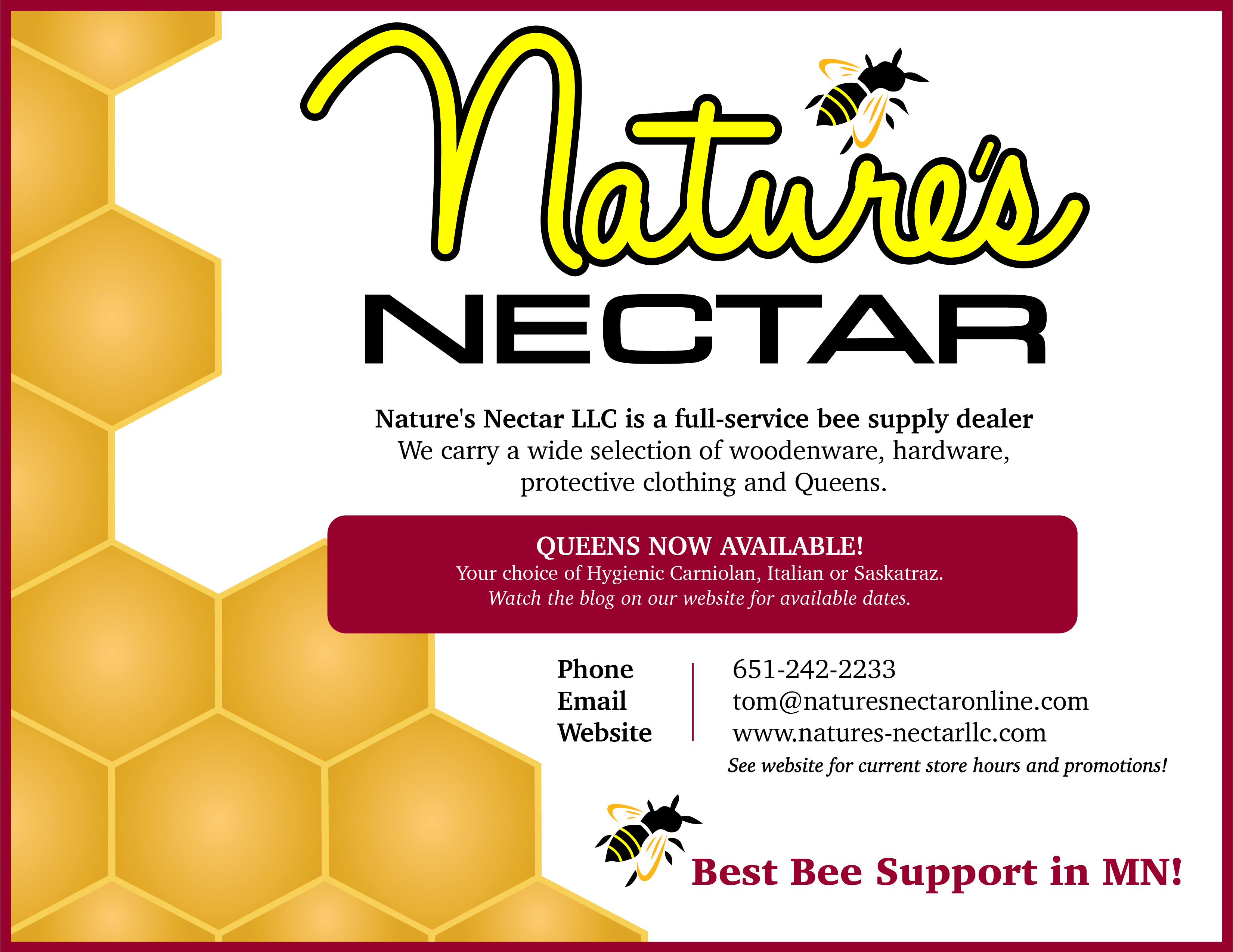 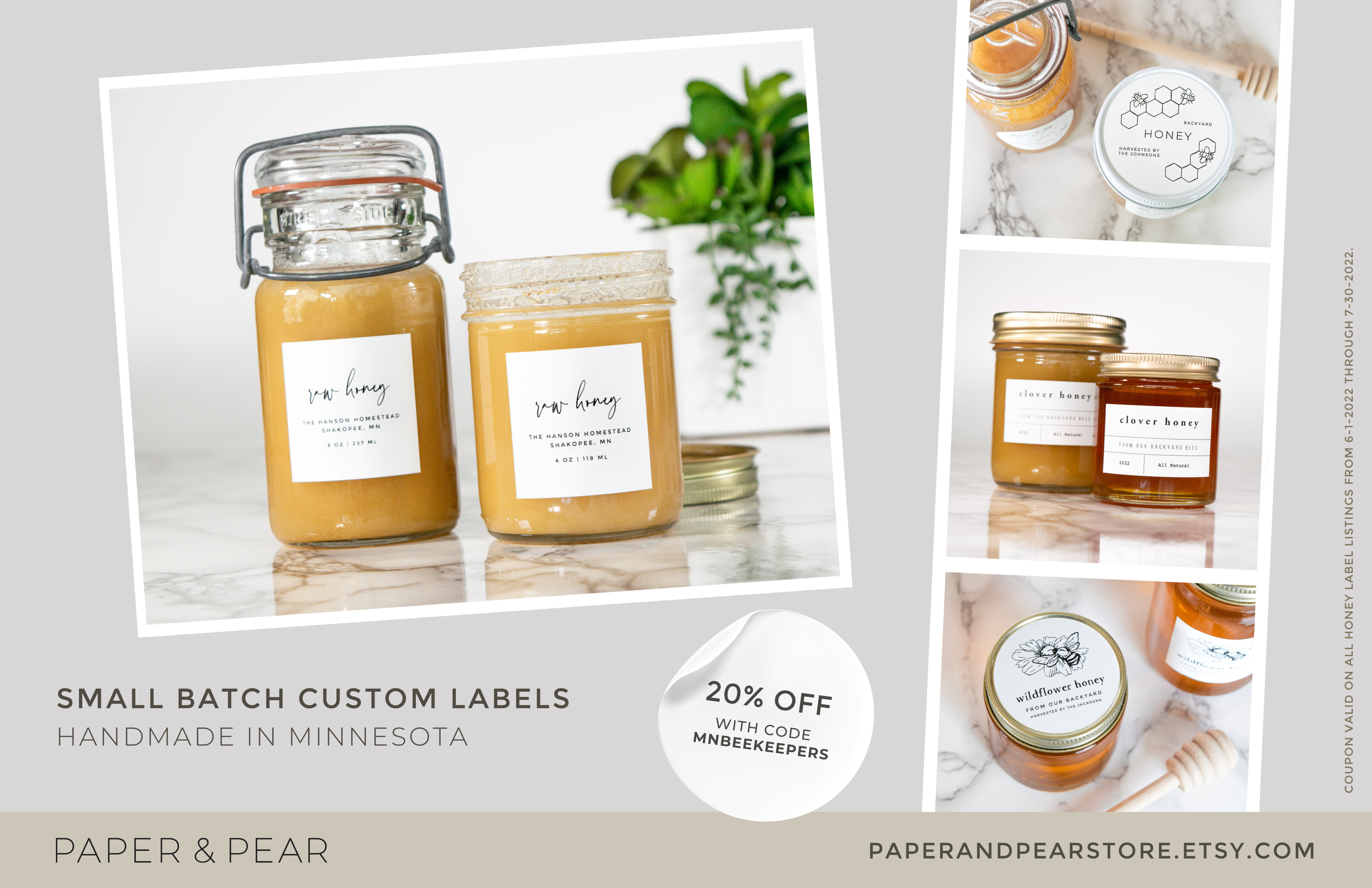 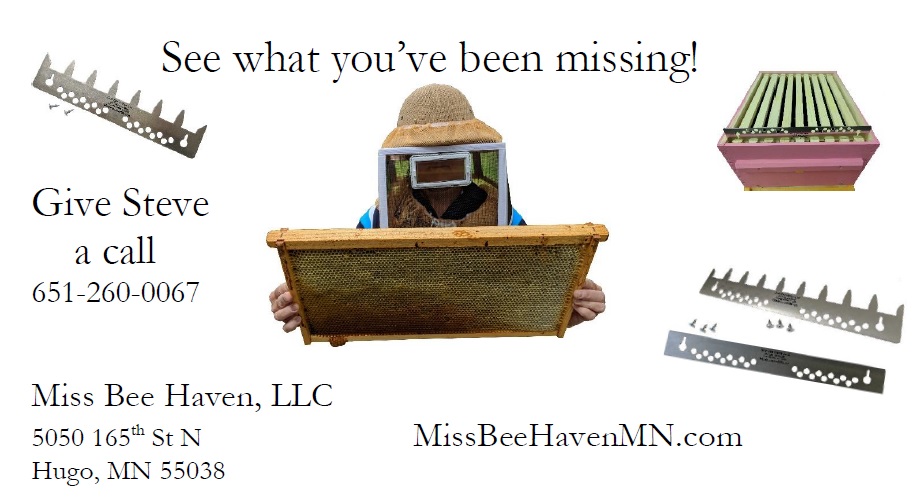 June 14,2022 at 7pm (CST)
Speaker(s): Rob Snyder, California Tech Team Field Specialist
(see HERE for his profile if you would like to learn more)

How to Identify when there is a problem and how to prevent mite outbreaks.

A Picture is Worth a Thousand Words

Email a photo to Gary Reuter at [email protected] before noon on the day of the member's meeting so he can project it on the screen during “Ask the Expert.” We will all learn from you what you see in your hive. 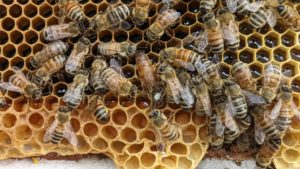 MHBA Board Minutes
Please check the website for the latest, approved Board meeting minutes.

Membership Renewal
There are three ways to renew your membership today!

Our Renewal Form can be found at our Become a Member page:
https://www.mnbeekeepers.com/become_member

If an article is a reprint from another source, permission must be gained if required. The due date for newsletter submission is the 25th of the month for the next month's newsletter.

Make 2022 the year to get more involved in your club! To become a Community Outreach volunteer or a Swarm Chaser please complete and submit the appropriate form by visiting:
https://mnbeekeepers.com/get-involved/

NOTE: The contents of this Newsletter are the sole property of the Minnesota Hobby Beekeepers Association (MHBA). NO REPUBLICATION OR USE in any form by any means, electronic, mechanical, photocopying, recording, or otherwise, by any other person or entity without the prior express written permission from MHBA’s Board of Directors is permitted. MHBA may be contacted at [email protected]